Homeopathy can help both adults and children with physical, mental or emotional health problems.

A recent audit has shown that patients have come to my practice with a diagnosis from their doctor of one or more of the conditions below :

Homeopathy is a safe, effective, scientific system of medicine, which assists the natural tendency of the body to heal itself. It recognises that all symptoms of ill health are expressions of disharmony within the whole person and that it is the patient who needs treatment and not just the disease, and therefore can be helpful in all cases of ill health no matter what the diagnosis.

People are becoming increasingly disillusioned with drug treatment and questioning the quality of their health care. They are searching for more natural ways to improve their health and are choosing homeopathy as a safe alternative. In homeopathy they find a system of medicine that looks at each person as a unique individual and a system that shows respect for the body and its ability to keep the person in optimum health.

Homeopathy is a scientific system of healing discovered in 1796 by Samuel Hahnemann, a physician who was disillusioned with the techniques employed by the doctors of his time. It employs the principle of ‘Like Cures Like’, also known as the Law of Similars. (The word homeopathy is derived from the Greek words meaning ‘similar suffering’.) Homeopathy treats illness with a substance which, when taken by a healthy person, produces symptoms similar to those experienced by the person who is ill.

Although homeopathy has its roots in ancient Greek medicine and in the work of the 16th-century physician Paracelsus, modern homeopathy dates back 200 years to the work of the German doctor and chemist Samuel Hahnemann. Hahnemann qualified as an orthodox physician but ceased to practise as a doctor because of what he saw as the barbaric medical practices of his day - which included bloodletting and the overuse of toxic medicines, leading to horrific side effects.

A brilliant linguist, he earned a living from translating books and was interested by a reference in a medical textbook to the use of China (cinchona or Peruvian bark) as a cure for malaria. Intrigued to know why China worked, he took doses of the remedy until he himself began to exhibit malarial symptoms. He stopped taking the China and the symptoms went away. From this he deduced that the ancient principle of 'like cures like' actually worked.

His next step was to see if there were safe levels at which toxic substances could be given - and still cure the type of symptoms that they might otherwise cause. His experiments with dilution led him to discover that the more a substance was diluted, the more potent it appeared to become.

Homeopathic medicine was born, but in practising it, Hahnemann and his followers were subjected to ridicule and persecution by the medical establishment, despite the fact that they were seeing patients getting better on tiny doses of medcines, prescribed on the basis of 'like cures like'. Many European practitioners emigrated to the United States, where homeopathy flourished in the 19th century – until the medical establishment there systematically acted to remove its influence.

Hahnemann ended his days as a renowned and very busy practitioner in Paris, working into his eighties and seeing a continuous queue of patients. On his death, he was buried in Pere Lachaise cemetery, where there is a large monument (photograph below) to him and to his discovery of homeopathy . 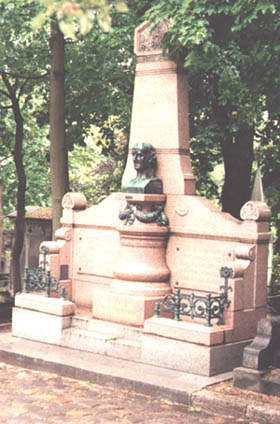 Many well known people have used homeopathy in the past

Quotes in Support of Homeopathy
By Dana Ullman MPH

For an entire book full of amazing stories and impressive quotes from “cultural heroes” of the past and present, see Dana Ullman’s book, The Homeopathic Revolution: Why Famous People and Cultural Heroes Choose Homeopathy.

C. Everett Koop, M.D.
I can’t remember a time when I didn’t want to be a doctor. The doctors I knew as a very young child must have helped to plant the desire in me, when I was as young as five or six. One homeopathic physician, Dr. Justice Gage Wright, was a great model.

Lindsay Wagner
If I was not an actress, I would be a homeopathic doctor.

Yehudi Menuhin
Homeopathy is the safest and most reliable approach to ailments and has withstood the assaults of established medical practice for over 100 years.

Dizzy Gillespie
There have been two great revelations in my life. The first was bebop, the second was homeopathy.

Mahatma Gandhi
Homeopathy cures a greater percentage of cases than any other method of treatment. Homeopathy is the latest and refined method of treating patients economically and non-violently.

Judy Norsigian and Jane Pincus , coauthors of The New Our Bodies, Our Selves
Homeopathic remedies can be effective in both major and minor ailments during pregnancy, birth, and the postpartum period. Sometimes homeopathy can help prevent problems and complications in ways that conventional medicine cannot match.

Mariel Hemingway
I use nothing but homeopathic remedies, for my girls as well.

Charles Frederick Menninger, M.D. , founder of the Menninger Clinic
Homeopathy is wholly capable of satisfying the therapeutic demands of this age better than any other system or school of medicine.

William James
An enormous mass of experience, both of homeopathic doctors and their patients, is invoked in favor of the efficacy of these remedies and doses.

Mark Twain
The introduction of homeopathy forced the old school doctor to stir around and learn something of a rational nature about his business. You may honestly feel grateful that homeopathy survived the attempts of the allopaths to destroy it.

Sir William Osler , “The father of modern medicine”
It is not as if our homeopathic brothers are asleep: far from it, they are awake–many of them at any rate–to the importance of the scientific study of disease.

There is certain help.”

(This refers directly to the homeopathic “law of similars”)

Homeopathic doses are perhaps the strongest.

Say hello to Arnica, Catherine Zeta-Jones’ best friend from the set of musical Chicago . The pal isn’t a she. It’s a homeopathic herbal remedy, and the two got to know each other intimately during the hamstring-hampering shoot. ‘The pain wasn’t there when I was doing it (applying Arnica).. I had that sticky stuff glued to me for months. Brings out the bruising, darling.’

Tina Turner looks about thirty-six, and her skin is flawless. She does not deprive herself. She sips wine at dinner, does not diet, does not take vitamins. If she’s feeling particularly stressed, she consults a homeopathic doctor.

Consultations online by email or by telephone.

©2022 Keith Smeaton is powered by WebHealer
Cookies are set by this site. To decline them or find out more visit our cookie page